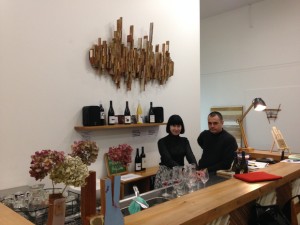 Jo was interviewed about her work with wine and sound for a feature on Radio New Zealand’s Music 101 programme:

“This week, The Auricle Sonic Arts Gallery in Christchurch opened what it claims to be a world-first – a wine bar geared up to marrying quaffing with listening. Jo Burzynska, a leading wine writer and sound artist, curates a monthly wine list to match music, aiming to heighten the experience of both.

Gemma Syme went to the gallery to check out ‘No Mean City’, the new work by Bruce Russell, and ask curator Burzynska about matching wine and sound.” 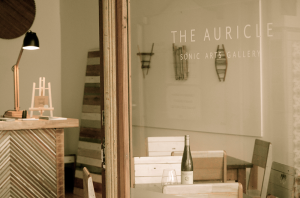 Jo Burzynska (Stanier Black-Five) is one of the founding members of The Auricle, the world’s first dedicated wine and sound bar. Every month she curates its wine list to complement the current exhibition, with wines matched to the sonic works playing in the space.

“There are strong synergies between sound and taste, with recent scientific studies confirming that what you listen to when you taste something – such as a glass of wine – has a profound effect on the perception of what you’re tasting,” explains Jo, a wine writer, sound artist and Vice President of the Cantabrian Society of Sonic Artists (CSSA), the group that established The Auricle.

“At The Auricle’s bar, the wines are specifically selected to match the music in the venue in order to enhance the appreciation of both,” says Burzynska, who will be drawing on both her own studies and scientific research in the area when choosing the wines on its list. “While wine and music matching events are gaining popularity around the world, as far as we’re aware this is the first bar entirely devoted to this concept.”

The Auricle bar opened its doors on Thursday (7 August), which coincides with the opening of its August exhibition, No Mean City by prominent local artist and CSSA President, Bruce Russell. It will then be open during gallery hours and evenings Thursday to Saturday.

The Auricle is an artist-run venue established by the CSSA, a group of local practitioners working in the area of music and sound. A charitable non-profit organisation, all proceeds from the bar will be reinvested into the running of the space and its gallery.

auricle.org.nz/wine-bar/
Her work at The Auricle on the opening of the bar was covered in an interview piece on New Zealand’s National Radio Morning Report and Music 101 programmes.