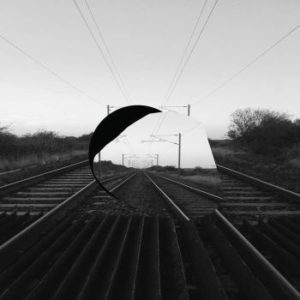 Jo Burzynska’s Alone with the Black Spirits has been released under her Stanier Black-Five moniker by the UK-based Rail Cables label on Rail Cables 2016. Those who know Jo’s longstanding interest in the sound of trains will appreciate what a great fit her work is with Rail Cables, a label devoted to showcasing new music inspired by train travel. Given her background, Rail Cables’ Stu Metcalfe also invited her to contribute the personal story of her sonic connection with the locomotive, which was beautifully transcribed by Kiran Dass and forms part of the stunning gatefold vinyl package. Copies of the album are available as a limited edition double vinyl gatefold LP or digital download from Rail Cables.

“Her piece ‘Alone with the Black Spirits’ is a 20 minute exploration of the sounds of a moving train. Since the conception of Rail Cables I have been hoping a musician / sound artist would attempt this. It seems so perfect that the task has been undertaken by somebody who cares so much about the attention to detail in the sonic manipulation of the sound of our chosen form of transport. Reminiscent of the work of Tod Dockstader, it is fascinating wondering how much of Burzynska’s piece is created from field recordings and how much editing has been involved. At times the hypnotic rhythms seem too perfect to have naturally occurred from the train itself. Yet this just helps remind us what a surprisingly musical experience travelling by train can be.” Stu Metcalfe

The recordings used on Alone with the Black Spirits were made on trains of varying eras and platforms in the UK, France, Belgium, Germany, Poland and New Zealand.

Curlews call and the soft syncopated panting of a steam train comes into earshot. As it builds in volume, the wheels on jointed tracks fall into a regular metrical beat, whistles blow and the birdsong is drowned out as the Stanier Black-Five thunders past.

A lull follows and then rain, through which another locomotive can be detected. This time its approach is an irregular jolting as it slips and labours on the rails before a loud hiss heralds its screeching halt. Then there’s a crackle and the sound of a needle hitting the end of the record. “Turn it over!” I urge, and my grandfather carefully flips the 45.

“Now this gradient is not as steep,” he explains as the B Side train breaks into a steady rhythm. “But hear how it changes as it goes over the bridge … and listen out for the bird when it reaches the other side.”

Many days of my early childhood I would travel like this, speeding through the British countryside and its towns with my grandfather, Stanley. Our only conveyance in most instances would be one of his train records; recordings made long before I was born of the last steam engines as they cut their final noisy passages across the country.

Sometimes these would have visual accompaniments, in the form of one of Stanley’s model train sets. I’d give the “right away” to a miniature engine, starting it on its trip as Stanley set off the record he’d cued up, breathing thrilling sonic life into their muted circuits.

Our excursions were driven by Stanley’s desire to share his passion for the railways on which he’d been raised. The son of a stationmaster, he’d longed to drive steam trains. It was a career derailed by a short sightedness that saw him become a teacher instead and the stridence of steam replaced by the subdued whirring of diesel. However, when he retired, he found in his similarly myopic granddaughter a willing companion to guide down the tracks he’d enjoyed travelling when young on these now decommissioned locomotives.

Forget the simple melodies of nursery rhymes and children’s songs; I revelled in the rich roar of the footplate’s fire. My lullabies were the pounding of pistons. I heard symphonies in the clatter and grinding friction of steel on steel.

When I was a little older, while the trains themselves were reduced to a distant rumble in my memory, they seemed to incline me towards similarly visceral and rhythmical soundscapes. But they were to return in full force on the eve of my family’s move overseas that heralded the start of my solo adult journey, when Stanley passed away and left me his record collection.

Alone with the black spirits which rage in the belly of rogue locomotives, the 33s, 45s and 78s offered comfort, conjuring fond memories of the happy hours I’d spent sonic trainspotting with Stanley. They didn’t simply hark back to a nostalgic age, but were heading forward to my next decade when they were to run through the sounds I myself would create.

Living with the vibrations of the Northern Line beneath me and Kings Cross Station metres from my house, my early adult years saw me once again immersed in train noise. It seemed fitting to mix Stanley’s records into this domestic environment, and before long I began incorporating them into my DJ sets. I found myself often playing only train records, which developed into performance pieces in their own right, culminating in the release of the Train Tracks 7” in homage to Stanley and his beloved historic recordings.

Fascinated by the sound of trains of all types I started documenting them myself: from steam trains on British heritage lines, through trans-European rail travel to Alpine crossings in New Zealand and the high speed bullet trains of Japan. These sounds have provided the material for numerous performances in recent years, as well as the track on this record.

I may now make my own recordings, but the impact of my grandfather’s vintage vinyl collection remains. It resonates in the way I hear the world and create my own work, living on as a powerful family legacy passed on to me in sound.