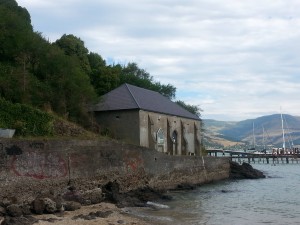 Avast! is the latest solo album by Lyttelton sound artist, Stanier Black-Five (Jo Burzynska), created from field recordings made around the port of her home town. Released on the European Entr’acte label, Burzynska is bringing Avast! back to its source for its New Zealand release at a launch event in February at Lyttelton’s Torpedo Boat Museum. This will feature a new live work based on her Lyttelton material and will also feature performances inspired by the port and the atmospheric Torpedo Boat bunker by Zeug Gezeugt and Regressor.

Sounds for Avast! were captured between 2009 and 2012 at sites around the natural amphitheatre of the extinct caldera: from the abandoned wartime gun emplacements on the top of the crater rim to the port and its cacophony of cargo ships, tugs and workshops. The work is also haunted by the resonance of buildings such as the Timeball Station, which were destroyed in the earthquakes.

Avast! is already starting to receive highly positive reviews in the European press since its release there in late 2013:

“Don’t be fooled by its mock-historical title, the album’s three pieces zero in on the disembodied sonic textures of modern capitalism. As ships dock and steel containers move in transit, engines whirr and grind, and relentless mechanical rhythms are punctuated with sundry creaks, bleeps and clangs.” Nick Cain, The Wire

Copies of Avast! will be available to purchase at the event at a special price and entry will be by donation to the Torpedo Boat Museum.