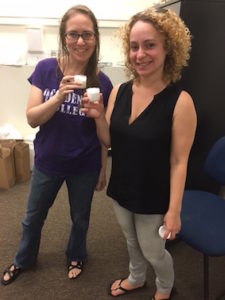 While in LA I took the opportunity to catch up with cognitive scientists Carmel Levitan and Sasha Sherman at their multisensory lab at Occidental College. I was keen to learn more about their research into sensory interaction given Carmel’s previous research into crossmodal correspondences between music, odour and emotion and Sasha’s interest in the brain and art.

As well as pursuing their own research in the multisensory labs, Carmel and Sasha use with students to study how the different senses interact to influence a range of perceptual and cognitive states, and the role of social and emotional factors in mediating these states. 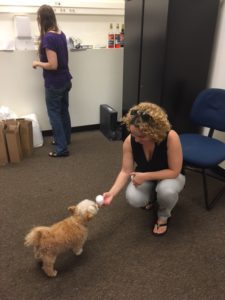 Sasha demonstrated an interesting experiment investigating whether priming participants with the same rhythm before a task made them work better together in performing it. With Carmel I sniffed some of the unfamiliar scents created for one of her olfactory experiments – Sasha’s dog Nacho also got in on the act, who I suggested likely had the best nose in the room. However, they told me about a study that suggested that the power human’s sense of smell could be more akin to a dog’s if our noses were closer to floor level!

I discussed with them my hopes that the crossmodal congruency between the smells and sounds that I would be using in my project at the Institute for Art and Olfaction would result in bringing different elements of its scent component to the fore. We also discussed the issue of olfactory adaptation, which is when you stop smelling something after prolonged contact. I’d aimed to keep the sound piece I’d made fairly short, but at around 12 minutes, one would expect this to occur. However, I wondered if sounds could retrigger the perception of smells within the work.

It was a great meeting with some exciting common research interests that may well develop into future arts-science collaborations.