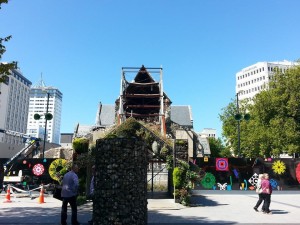 Over three years ago the bells of Christchurch Cathedral ceased tolling when the iconic building was destroyed in the major earthquake that shook the New Zealand city in February 2011. In Resonifying the City, Stanier Black-Five brought this integral part of the city’s soundscape back for the weekend of the Audacious – Festival of Sonic Arts, which joined her ongoing installation in Colombo Street that reflects the sounds of a once noisy thoroughfare back into the street.

The earthquake transformed the city soundscape dramatically, for a while muting the noise of daily life and removing some familiar sounds altogether. Resonifyng the City returns sounds to their old locations through a series of installations created from archival material and personal recordings.

Many people in Christchurch miss the sound of the cathedral bells. These returned to haunt the ruins of the building, evoking a nostalgia for what has been lost. The 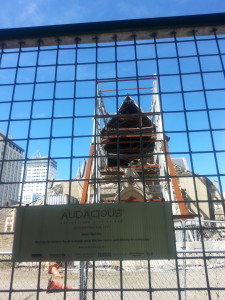 juxtaposition of this sound from the past chiming in what is now a very different city also aimed to provoke reflection on the change that has occurred since the bells were last heard and pose questions about the past and its relevance to the present.

The sounds for the installations were recorded around Christchurch by Stanier Black-Five, except the historic Christchurch Cathedral bells recording, made and kindly donated by Mike Clayton.