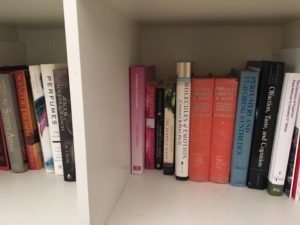 Swotting up with IAO’s perfume library

Having only had one fairly brief foray into making perfume in the past, I was interested to see how I’d fare with more formal training. I hoped that my experience in assessing wine and some blending experience in that realm would stand me in good stead for my residency at the Institute for Art and Olfaction (IAO).

Before I started, I had an idea of what I wanted to create to evoke the imagery of La Chevelure, the Charles Baudelaire poem that I was working with. The perfume would have to convey three ideas: that of the sea, a dry fragrant forest and the exotic. But where to start?

IAO’s Saskia Wilson-Brown suggested my first task should be nosing through the samples in the perfume organ. As sniffing everything would prove impossible, and likely lead to temporary anosmia, I check out the vials that hold scents I think might suit my brief. The organ’s aromas provided an intriguing experience – from Cashmeran with its wood earthy almost fungal notes – that I earmarked for my fragrance – to more divisive aromas such as Indolene – redolent of decay with a whiff of the faecal – not appropriate for this piece but something I’d like to experiment with in the future!

After assembling my aromatic palette I set to work making the three “accords” that would combine to create my final smell-track – these are a number of aroma “notes” that are combined to create an effect akin to a musical chord. First up was the wood, which given there are so many woody extracts available, I thought would be the easiest to start with. 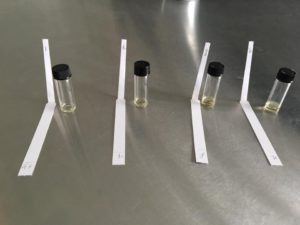 My top four wood accord blends – but which one to choose?

The process was one of trial and error, with each version’s ingredients and their proportions noted down for reference. After nine attempts I reached a combination that I was pleased.

This first attempt at fragrance mixing hadn’t been quite as hard as I’d feared. I’d made swift progress, possibly due to being smell-fit from my wine assessments. But I also certainly noticed similarities between this and my experiences of wine blending and even with the mixing and layering of the recordings in my music too.

With and with a decidedly worn out snout I called it a day, then well into the evening I was still haunted by – albeit pleasant – aromas of earth and wood.