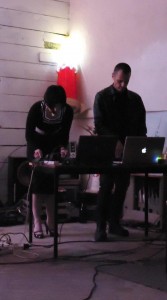 Stanier Black-Five is touring with Malcolm Riddoch in Europe: September 2012, with the following dates:

Ljubljana 14.09.12 Earzoom Festival @ International Computer Music Conference – http://www.icmc2012.si/
Body Waves
Body Waves is a live infrasonic performance whose primary sound source in this exploration of vibroacoustic perception are the unique recordings made by Stanier Black-Five at the epicentre of the recent earthquakes in New Zealand, which capture the vibrations of its massive aftershocks, collapsing buildings and subsequent demolitions. These are transformed by Riddoch to accentuate lower frequency harmonics in a spatial work spatialised through a quadraphonic set-up to immerse its audience/participants in this visceral music of the body.

London 17.09.12 noise=noise – http://nnnnn.org.uk/doku.php?id=noise_noise_170912
“Global Resonances”
Australasian sound/noise artists Stanier Black-Five (NZ) and Malcolm Riddoch (Aus) will be collaborating on a live work in three parts using both the natural acoustic resonance of the space in which they perform and that of a location on the other side of the world. Stanier Black-Five will start proceedings using field recordings made in disused cement silos in Auckland, NZ that harness their amazing natural reverb. Riddoch will then enhance this reverberant soundscape using live feedback techniques exploring the resonant frequencies of the soundscape within the performance space. Finally the feedback residue will play out within the space itself. From Auckland to a synthesis of Auckland-London to London acoustic spaces, Global Resonances traverses space-time through electroacoustic noise.